“How does it feel to know that your teenagers will now know their mother has a sexual imagination?”

This was perhaps the most provocative of the questions that came my way after A Small Indiscretion was published, and it threw me. In a review in Bustle, Rebecca Kelly calls the sex in A Small Indiscretion “decidedly un-erotic, even uncomfortable or cringe-worthy.” Is this, then, what my kids might assume constitutes their mother’s sexual imagination?

My 19-year old son asked to read the book when the Advance Reader Editions arrived. It sat on his nightstand for a long time, bookmarked at page 30. Every so often I’d sneak in his room to see if he’d progressed, but the book mark never moved. I finally told him he shouldn’t feel any pressure to finish the book if he didn’t want to, and he seemed relieved. He said maybe it was a little too character driven for him. Only later did he admit the truth. The son character, Robbie, plays the piano and is a good swimmer, enough similarity to make my son uncomfortable. The novel is written in the form of a letter from a mother to her son, which certainly must have contributed to my son’s unease.

The book did time on my 17-year-old daughter’s nightstand, too. The bookmark got stuck about half way through. “It’s not that it’s not good or anything,” she said. “It’s just…I mean…I know it’s not you, but I know you, so I can see where your ideas come from, and it’s just kind of weird.” As far as I know, neither one of them ever got to the sex scenes, un-sexy or otherwise, which is a relief. My other two kids, daughters aged 11 and 14, are young enough I’ve simply told them they’ll have to wait.

In the writing of the book, I always knew that the narrator, Annie Black, was only writing for herself, that she would no more share her sexual experiences with her child than I would. I knew her confession would never find its way into anyone else’s hands, and as I wrote, I had to persuade myself the same was true of my novel, that I would be the only person to read it. I locked myself in the room of my mind and followed the characters wherever they went, even into bedrooms in which they undressed. But I was never uncomfortable writing the sex scenes, not only because they aren’t explicit, but because it was the underlying emotional truth I was focused on describing, not the sex for its own sake.

The Bustle review goes on to say that the un-sexy sex scenes have a “gritty emotional realism,” that they are there “to intrigue, not titillate.”  I hope this is true; as critical as at least one of them is to the plot, the sex scenes, to me, felt minor relative to the scope of the story. So I was taken aback when again and again, readers called the sex out. My husband read the book for the first time and pronounced it “a sexy page-turner.” The jacket copy my editor wrote included the term “sexual desire,” and reviews referred to “sexual antics” and “sexual confusion.” I ought to have been prepared for this, perhaps, but I wasn’t.

When I published my first short story, The Company of Men, which went on to win an O. Henry Prize, I remember a moment of panic when I realized my mother-in-law was likely to read it. There isn’t any graphic sex in that story, either, and yet I felt ashamed of paragraphs like this one:

“And beyond that, where my husband’s arm had been, was only the back of the couch. There was no sign of the formidable wrist, the sturdy thumb, the callused, well-loved palm. There was no further sign of my husband in the room at all. I was on my own in the company of men with the makings of a straight in my hand, aces high. Desire was thumping in my chest and the instinct to win, to go forward with abandon, was shooting through me, across the back of my neck and down between my legs . . . Then all at once there was a knee pressed purposefully against my thigh beneath the table.”

The protagonist was born out of my imagination, after all. Would I no longer be perceived as a nice girl who fit well into my husband’s traditional, Catholic, mid-Western family?

My mother-in-law read the story. She complimented me on it, graciously, and when my novel came out a year ago, she wrote about it to all her friends. My father-in-law was in the hospital shortly after the novel’s release, and he bought copies for all the nurses who’d cared for him during his stay. Neither of them seem ashamed; they seemed proud.

Then again, they’re adults. My kids aren’t, quite.

Congratulations to December’s giveaway winner, our very own Bonnie Sterngold.

January’s Giveaway includes trade paperback copies of the three novels that most inspired me as I wrote A Small Indiscretion.

The Blind Assassin, by Margaret Atwood

The Stone Diaries, by Carol Shields

The Lives of Girls and Women, by Alice Munro 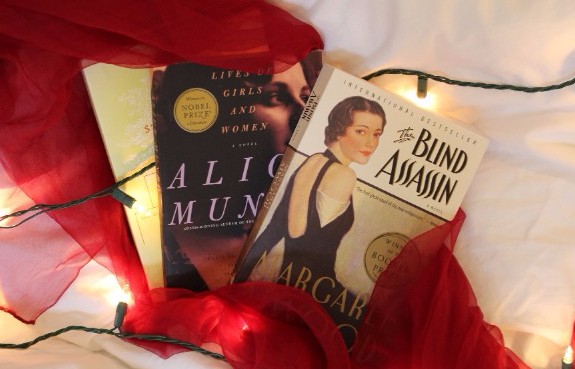 Are we ruining our children by offering them a better life?

My new year’ resolutions often revolve around doing right by my kids and this year, once again, I find myself wondering about how to fend off entitlement. Here’s an essay I published last year in the New York Times Sunday Magazine about my home town, and the value of working cruddy jobs. I know many of you have already read this essay; I’m sharing it here for those who haven’t. The Times reader comments, alone, make great food for thought: Happy Meals: Are we ruining our children by offering them a better life?

Funny Once, by Antonya Nelson

“A strangely vital thing, love, a very invisible yet essential item, hidden as an illness, mortal that way as well.”   — From the story, Winter in Yalta

If, like me, you found that a few of the story collections by male writers that made news and won prizes this year were a little too far out for your taste, I encourage you to try Antonya Nelson’s decidedly life-like collection, Funny Once. I was sad when each and every one of these remarkable stories ended, and they are rattling around in my brain still.

“Nelson’s run as one of the finest contemporary short story writers takes an exhilarating leap forward with her outrageously superb seventh collection . . . Nelson is scandalously funny, her characters are royally screwed up and wildly inept, and their dire predicaments bust down the doors on the most painful of life’s cruel jokes, from betrayal to divorce, addiction, and old age . . . Each of Nelson’s magnetizing stories generates atomic vibrancy and achieves the psychic mass of a novel.” ―Booklist, starred review 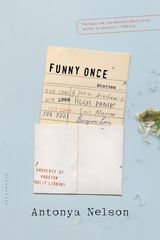 But: Recent studies show that readers trust reviews from other readers more than they do those from official media channels. If any of you found something to love in A Small Indiscretion and you had a few moments to leave a word or two on Amazon, I would be tremendously grateful. Just click the button below. And my most sincere thanks to the many of you who have already bestowed the gift of Amazon stars. Like American Express says, Priceless.