The trade paperback was released today, Tuesday, Feb. 9th. You can find it everywhere books are sold. 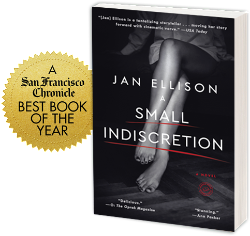 Blog: Why over-parent your kids when you can hover over your novel instead? Read all about it below: “The Helicopter Parenting of Baby Book.”

Book Group Giveaway: Everything you need to make A Small Indiscretion your next book group pick, including 5 copies of the paperback.

Coming in April: In the interests of working on my second novel, I’m moving to a bi-monthly newsletter. Look for the next installment in April: “How much of this is true? Questions from readers that authors dread.”

Bonus Content for Newsletter Subscribers: If you’d like to receive my bi-monthly news in your in-box, join my mailing list below. When you’re confirmed, you’ll receive my brand new digital booklet, “Breaking Into Print: 100 Revisions, 100 Rejections and an O. Henry Prize,” the tale of how I published my first short story and became an overnight success—in just 14 (count ’em) years! “Breaking Into Print” includes actual rejection letters, photos, and early drafts of my story, “The Company of Men.” It should be fun for readers and writers alike. I’ll send it along to existing subscribers, too.

Thanks for reading, loyal people. You make the game worth playing.

February’s giveaway equips you to arrive at your next book group evening in style. Enter to win five copies of the newly printed Trade Paperback Edition of A Small Indiscretion, a silk scarf perfect for Valentine’s Day, and a Sherpani anti-theft bag (protect those books!) that I myself am coveting. 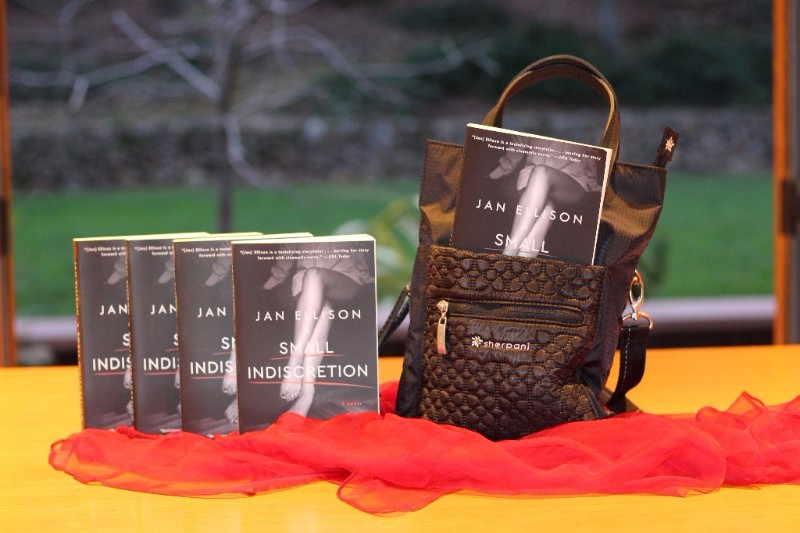 For Andrew, who arrived early and left too soon

The trade paperback edition of my book, like the hardcover, is dedicated to my first cousin, Andrew Miles Krantz, who arrived early and left too soon. Here is an essay published last year on Amazon’s book review about the events from my own life, and my family’s, that gave rise to the writing of A Small Indiscretion. I’m sharing the essay here in honor of Andrew’s memory. We are lucky he graced our lives, and we miss him every day.

A Chance to Recover a Lost Destiny
Omnivoracious: The Amazon Book Review, March 9, 2015

The Helicopter Parenting of Baby Book

“My agent pointed out ever so gently that while he was away from his email over the weekend, I’d sent him no fewer than 23 individual messages.”

When I sold my novel to Random House, I assumed publishing a book would be a more or less reptilian exercise: You plant the egg (the novel) in a nice warm place (a top publishing house), and it hatches and raises itself. But it turns out to be a lot more like raising an infant, only not as cuddly. Not softened by a flood of oxytocin. Not cushioned by a love that grows every single day.

When our first child, now a freshman in college, was six months old, I hired a nanny to take care of him while I worked half-time from home. I prepared a document entitled “Taking Care of Baby,” which I came across recently, two pages of single-spaced typed directives for our unsuspecting new hire, who is instructed to:

And for a walk in cold weather, Nanny must:

The woman upon whom this document was thrust had already raised four children of her own. She ought to have been typing up instructions for me.

Fortunately for my kids, I ran out of fuel for that kind of helicopter parenting a long time ago. But that doesn’t mean I’ve stopped hovering. To paraphrase our eldest daughter: “You know how some parents derive their sense of self-worth from the success of their kids? Well, you don’t do that with us. But you definitely do it with your book.”

My book had what my publicist called “a slower ramp.” It received great trade reviews from Kirkus and Booklist, was in a feature in Cosmo, and had generous blurbs from other authors, but the day it was published, it did not yet have a single press review. I was advised not to worry. I was told to focus on writing my next book—sound advice that I systematically ignored.

Partly, this was the result of an obsessive-compulsive nature. Partly, it was because in my twenties, I’d spent five years running marketing for a Silicon Valley start-up and helped take the company public. Random House was working hard on my behalf, but when it became clear the book was not going to magically transport itself onto the New York Times bestseller list, my maternal marketing instincts kicked in. Work on the next novel stalled in favor of the feeding and care of the first, and I started working 14-hour days marketing the book. I was on West Coast time, three hours behind, but by the time New York publishing began its day, I had typically already been at my desk sending emails for at least an hour.

Random House publicity ended up doing a stellar job—securing a rave review that appeared on the front page of the San Francisco Chronicle’s book section, an Editor’s pick from Oprah, prominent radio spots, and essay placements in both the New York Times and the Wall Street Journal. When their campaign wrapped up after 6 weeks, though, I was still in overdrive, and I thought they should be, too. But that’s not how it works.

My agent, like my nanny all those years ago, was patient, and kind, and honest in guiding me through the realities. He helped me understand that a publishing house can only market a single book for a short time before it must move on to other books, and nothing I could do was going to change that. One Monday morning, he pointed out ever so gently that while he was away from his email over the weekend, I’d sent him no fewer than 23 individual messages.

Clearly, it was time to settle down. But I couldn’t. Or wouldn’t.

I learned a lot. I could (I might) teach a class on what not to do as a first-time author: Don’t waste your time stalking Goodreads reviews, and Amazon rankings, and Google search results. Don’t send so many emails that you exceed your daily limit and turn your messages to SPAM. Don’t raise your voice with your publicist, your agent, your editor or your marketing team. Don’t sweat the small stuff. But don’t wait until the last minute to build a good web site, either. Don’t fail to nail down an elevator pitch until a year after your book has come out. Don’t neglect to turn on Google Analytics. Don’t be surprised when you find you need not only a Facebook Author Page, but Facebook Insights, a Facebook Pixel, and Facebook’s Ad Manager and Power Editor. Do not resist Amazon Associates, MailChimp, Twitter, Instagram, Pinterest, LinkedIn, YouTube.

Do not wait to expand your vocabulary to include terms like landing page, mobile discovery, audio clip, bookplate, illegal download, metadata, keywords, thumbnails, blogging. Do not hesitate to call in reinforcements—like your father. Especially if, like mine, he happens to be a graphic designer, marketing consultant and a writer himself: www.etellison.com. Do not expect to spend every evening with your family. Do not think you will survive two dozen book club gatherings and 30 events without someone calling your young protagonist “icky.” Do not show up for your first reading unprepared. Do not forget your fancy new pen. Do not expect your publisher to take care of everything. Do not try to take care of everything yourself.

In the end, have all these efforts mattered? I think they’ve mattered in helping build personal relationships with independent bookstores and with readers, and they’ve helped the book find its way into the hands of people to whom it has meant something. Beyond that, the effort mattered in the way it mattered to me that my son’s imagination was stimulated by a black and white mobile, and that he was bundled up in his socks, his blue hat, and his blue mittens when it was cold outside. It mattered to me to know that I had done my best—and the only way to make all of it matter less was to allow time to pass, and to ultimately turn my attention to a new baby, or a new book.

Will I have calmed down when it comes time to publish a second, a third, a fourth book? Will I have traded helicopter parenting for parenting on-demand, as I have with my actual children? I hope so. I hope that like our fourth child, who just turned twelve, my next books will dress themselves from an early age and make their own breakfasts. They will remind me to put my cell phone away when it’s time to get off a chairlift. They will even take it upon themselves to make bread when the bananas go brown.